The Moral Shambles That is Our President by John Scalzi
Sunday August 13th, 2017 at 8:39 PM 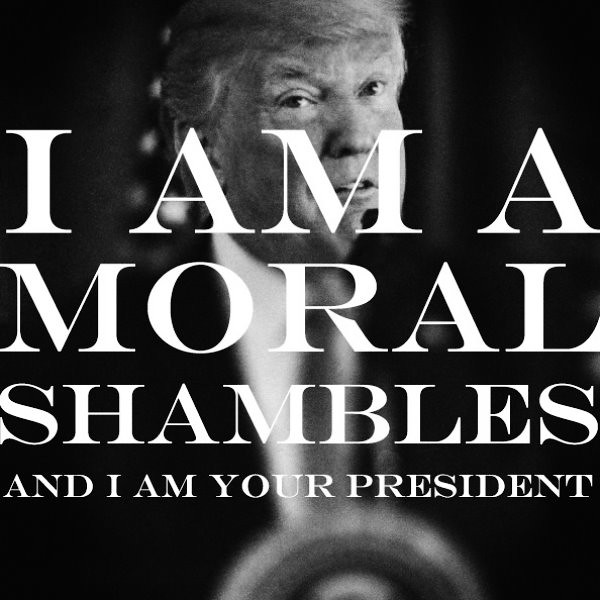 Denouncing Nazis and the KKK and violent white supremacists by those names should not be a difficult thing for a president to do, particularly when those groups are the instigators and proximate cause of violence in an American city, and one of their number has rammed his car through a group of counter-protestors, killing one and injuring dozens more. This is a moral gimme — something so obvious and clear and easy that a president should almost not get credit for it, any more than he should get credit for putting on pants before he goes to have a press conference.

And yet this president — our president, the current President of the United States — couldn’t manage it. The best he could manage was to fumble through a condemnation of “many sides,” as if those protesting the Nazis and the KKK and the violent white supremacists had equal culpability for the events of the day. He couldn’t manage this moral gimme, and when his apparatchiks were given an opportunity to take a mulligan on it, they doubled down instead.

This was a spectacular failure of leadership, the moral equivalent not only of missing a putt with the ball on the lip of the cup, but of taking out your favorite driver and whacking that ball far into the woods. Our president literally could not bring himself to say that Nazis and the KKK and violent white supremacists are bad. He sorely wants you to believe he implied it. But he couldn’t say it.

To be clear, when it was announced the president would address the press about Charlottesville, I wasn’t expecting much from him. He’s not a man to expect much from, in terms of presidential gravitas. But the moral bar here was so low it was on the ground, and he tripped over it anyway.

Our president, simply put, is a profound moral shambles. He’s a racist and sexist himself, he’s populated his administration with Nazi sympathizers and white supremacists, and is pursuing policies, from immigration to voting rights, that make white nationalists really very happy. We shouldn’t be surprised someone like him can’t pass from his lips the names of the hate groups that visited Charlottesville, but we can still be disappointed, and very very angry about it. I hate that my baseline expectation for the moral behavior of the President of the United States is “failure,” but here we are, and yesterday, as with previous 200-some days of this administration, gives no indication that this baseline expectation is unfounded.

And more than that. White supremacy is evil. Nazism is evil. The racism and hate we saw in Charlottesville yesterday is evil. The domestic terrorism that happened there yesterday — a man, motivated by racial hate, mowing down innocents — is evil. And none of what happened yesterday just happened. It happened because the Nazis and the KKK and the violent white supremacists felt emboldened. They felt emboldened because they believe that one of their own is in the White House, or at least, feel like he’s surrounded himself with enough of their own (or enough fellow travelers) that it’s all the same from a practical point of view. They believe their time has come round at last, and they believe no one is going to stop them, because one of their own has his hand on the levers of power.

jerkso
reply
You are making hoops for the president to jump through, he denounced all side for the violence. He has denounced the violence you know it, you're response is weak and without substance. Why don't you talk about the cause of this and their numbers growing? Hint it is not Trump.
Bangkok, Thailand

katster
“Trump comments were good. He didn’t attack us. He just said the nation should come together. Nothing specific against us….. There was virtually no counter-signaling of us at all. He said he loves us all…. No condemnation at all. When asked to condemn, he just walked out of the room. Really, really good. God bless him.” ~The Daily Stormer

boredomfestival
There are not multiple sides to this.

jerkso
There aren't multiple sides, care to explain, that seems a refutation of reality as much a commonsense. Seems both of you perhaps are living in a bubble, Quit it with the might is right reasoning in such attitudes and ignorance. Recognize the poison there on both sides.Ignoring this collectivism of any sort is going to end poorly for everyone.

torrentprime
“Why don’t you talk about THOSE PEOPLE and how their numbers make me think THOSE PEOPLE ARE BREEDING LIKE RABBITS. Btw, it is Make America Great Again or Make America White Again? Made ya think, didn’t I?” 🤢😷🤢😷🤢

reply
The golf analogy was icing on the cake.
Denver, CO

Those online ads driving you bonkers are virtually 'worthless for brands' by Thomas Claburn
Wednesday January 4th, 2017 at 11:45 AM

One dollar of online display advertising will buy you approximately $0.03 worth of actual ads seen by real people, according to Bob Hoffman, a partner in media consultancy Type A Group.…

Ancient famed Windows cracker L0phtCrack has been updated after seven years, with the release of the "fully revamped" version seven.…

'ICANN's general counsel should lose his job over this' by Chris Williams
Tuesday August 9th, 2016 at 4:02 PM

Interview  It has been four years since Shaul Jolles, as CEO of Dot Registry, filed applications for five new internet extensions – .corp, .inc, .llc, .llp and .ltd – and wrote a check for just under $1m to have them considered by domain name system overseer ICANN.…

jerkso
reply
Never thought ICANN could find newer ways to be better at being shit.. But seems they have been working on it.
Bangkok, Thailand

The DevOps message was in force this week at Microsoft's Build event.
Read the whole story